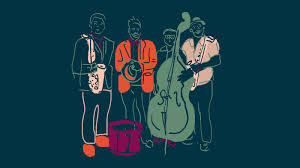 I often get asked: “Aren’t you too young to be listening to this boring old people’s music?” My immediate answer is: “It is only boring to ears that hear but fail to listen, if you could spend some few minutes attentively listening, your soul would be aroused in ways you’ve never imagined.” The truth is that there is nothing boring about Jazz, and it is not old people’s music. I refer to jazz as ‘an art form meant for the soul.’

I was in Grade 10 and 15 years of age when I first fell in love with Jazz. One of my uncles used to sell pirated music in public areas, and so we used to collect various genres of music so he could cater for all types of his customers. At the time I was a huge Deep House head. I used to know almost every new song, EP and album that dropped on the scene. I was the go to person if you needed a new Deep House song at school and in the neighbourhood. Hence it is no surprise that was a DJ at some point in my life, I was not serious about it but I used and can still play.

Among the genres of music my uncle and I collected was Jazz. I didn’t pay much attention to it up until one day he came with this classic collection that comprised artists like Adderley Cannonball, John Coltrane, Alice Coltrane, Sonny Rollins and the likes; this was very powerful compilation of songs by these legendary artists. In this very compilation there was this one particular song that caught my attention; I literally played that song at least five times repeatedly upon hearing it for first time.

The song invoked some inexplicable sense of nostalgia every time I heard it. There was this feeling of peace, tranquility, freedom and pure joy that was awakened deep inside of me that I could not trace as to when last I felt it each time I heard the song. It was as if I had heard and danced to this masterpiece before in another time, space and dimension that I could not define; my déjà vu was at the mercy of this prolific song that had no words but just a perfectly aligned arrangement of instruments decisively led by the saxophone.

Now the problem was that this masterpiece was titled ‘Track 1’ and we had no idea what its actual name was. I immediately loaded the track on my mobile phone, and a lot of times when we played chess at school I would play the track. The gents, and our chess coach and Mathematics teacher, Mr Maruga, loved it. It was a norm to find us on the main foyer of Makgetse High School, where I matriculated, playing multiple games of chess while ‘Track 1’ was on repeat.

At the time I was using this Walkman Sony Ericsson cell phone which had an application that you could use to find the names of songs, which basically works like Shazam. Thanks to that application that I got to learn, months later, that the real title of ‘Track 1’ is actually Children’s World by Maceo Parker from the album Roots Revisited. That timeless masterpiece was my first love as far as Jazz is concerned, and from that one track it just never stopped, and I don’t think it will ever cease.

My love for Jazz grew even more stronger in 2012 when I was doing Matric. At the time my ear for jazz was shaping up quite well and my collection had widen a bit – I was listening to artists like Fela Kuti, Dudu Phokwane, Miles Davis, Sello Galane, Selaelo Selota, and the likes. I was still more on the surface up until one Sunday morning at around 11:00am when one of our neighbours was jamming some serious tunes I have never heard before. He had large speakers out and the volume was probably at its peak.

Because there was no fence in between our house and the neighbour’s at the time, I could see everything vividly. I decided to go seat outside underneath our peach tree where I had clear view of what was going on. My aim wasn’t really to watch but to just listen and allow the music to sink in without any interference. As I was enjoying the Jazz tunes I had never heard before, I started seeing cars arriving at my neighbour’s yard one by one. In each car got off beautifully and formally dressed men, some wearing berets and round hats as finishing touches to their attractive attires.

What made the scene more profound is that each man got off the car with a bottle of whiskey, brandy or/and cognac, and they all sat in a circle that kept widening with more people arriving; on the floor there was a green clean a carpet. I had never seen such a beautiful setting of formally dressed old men before in my entire life. Little did I know I was in for a treat of a lifetime – the plot was just beginning to unfold.

After a while as I am seating gazing at every move that is taking place in the scene and listening attentively to every song that was played, they played my favourite song. Yeah, you guessed it right, Children’s World by the legendary Maceo Parker. Now as I was excited that at least I knew and loved that one joint, I began to hear whistles from the circle and immediately one man stood up as if he was a clown about to entertain the crowd raging with whistles in applause and salutation.

I still recollect those images vividly as if the Jazz dub was yesterday, in part, this because of the feelings that were wilding outrageously throughout my soul that day – I was like a little boy being tickled endlessly.

The man who just took centre stage on the carpet started off by weaving his shinny brown dapper shoes that was designed like an original Florsheim from a distance, I knew this because my dad owned a couple of pairs of Florsheims, and it is common to find old men wearing them in the township. He then reached for his back pocket, took out a duster cloth to wipe the very same shoe he was weaving in what seemed to be a clownish pose.

At that stage, the song was heading for its climax. As soon as the man in his grey Brentwood trousers, a slim white tugged in shirt, a brown belt that matched his shinny shoe and a black beret, reach for his back pocket one more time to put back the duster cloth; I have never seen anyone dance like that in my life, let alone for a jazz track I happened to love. It wasn’t after 3 minutes of the man dancing non-stop that I started hearing others who were seated saying “sheya sheya sheya die ding!” which directly translate to ‘leave it off.’ It was in that moment that the man sat down and another ascended the stage to showcase if moves, and the routine went on and on inviting more whistles and claps from a very organized and attentive crowd seated in a circle.

It was like I had paid to watch a well-planned and orchestrated show in theatre. Everything vanished in those few hours and it was just me and those folks as they “dikered” their souls out to the music, a term I got to learn later in my journey of listening and loving Jazz. That was the day when Jazz engulfed my soul and even to date it remains my favourite genre of music. I got to learn that day that Jazz is not just the music, but it is a culture in its own right.

My love for Jazz is also fired up by irrefutable and undisputed role it played in our liberation struggle against the cruel regime of apartheid. Legendary artists such as Bab’ Hugh Masekela, Bab’ Dudu Phokwana, Bab’ Wiston Mankunku Ngozi, Mam’ Merriam Makeba, Mam’ Dorothy Masuku and the likes, used the art form to narrate tales of our struggles in order to mobilise and galvanise the international community to support our struggle. Jazz as an art form played a very central and crucial role in persuading the United Nations to declare apartheid as a crime against humanity and the imposition of sanctions against the apartheid regime by the international community.

Even to date, Jazz remains a very powerful political weapon that is used to mobilise and conscientise our society and the international community about the struggles we face today. When you listen to pieces like Marikana by Azah from the album Batswadi; a beautiful rendition in xiTsonga that is dedicated to the miners that lost their lives in the Marikana massacre on the 16th of August 2012; you are immediately conscientised to the struggles we are still facing today as black people in South Africa. This rendition is but one of many of its kind.

Furthermore, Jazz continues to play a very paramount decolonial role of asserting our African identity without shame. It is through Jazz that our languages, indigenous instruments, our identity and spirituality are echoed on international stages and throughout the scholarship of music. Listening to Amathambo by Nduduzo Makhatini, True Call by Nono Nkoane, Morena Thusa by Dr. Tlokwe Sehume and the likes, my African pride is aroused and set alight, especially knowing that these masterpieces are performed on global stages; in front of nations that have had a demeaning perception of what it means to be African for decades and decades of centuries.

I believe Jazz is currently underrated in the country and we should repent as soon as possible from that grievous sin, because we are a Jazz powerhouse that continues to birth the world’s greatest Jazz artists. The new generation of artists carry the legacy of their fore-bearers with pride and distinction, something we need to celebrate and embrace. Beyond that, our Jazz artists have immensely contributed to the scholarship of music, particularly on the subject of decolonialization and Africanization of education in Africa.

Jazz is our national pride and we should never cease to give it the honour it deserves, and celebrate it with pride. As symbol of honour, I recommend that we build a national jazz museum that will consist of a wall of fame for Jazz artists. Furthermore, the government must commission indigenous instruments as a strategic step to support the decolonial project that is facilitated by Jazz as a genre of music and as a scholarship.

I conclude this sentimental piece by paying to tribute to all the fallen jazz artists. I say to these heroes and heroines, rest your bones and flash in eternal peace, but may your spirits live on. May they continue to resuscitate our sense of pride in being African. I dare say to you that you shall not know death for your spirits live in the masterpieces, records and scholarly works you have left us with as a guiding compass to our being, resistance, bravery, love and humanity. Robalang ka kgotso diaparankwe tsa Afrika.